Goodnature A18 humane squirrel traps are the future of grey squirrel control. Powered by a CO2 cylinder, the trap attracts the target species with a dedicated, long-life grey squirrel lure. When the Grey Squirrel enters the tunnel of the trap to get to the food source, it activates the trigger which is located at the back of the tunnel. This trigger activates the trap, instantly dispatching the squirrel humanely and efficiently.

Due to predation, we have included a counter with each trap that will show how many times it’s been activated, should the dispatched rodent be scavenged prior to checking.

Because Greys are a known destroyer of our native broadleaf habitat, when looking at placing the trap into woodland, parkland or your garden, we recommend choosing an established broad leaved tree, fence or post that sees regular grey squirrel activity. Once installed as per the quick start guide, a couple of handfuls of peanuts, sunflower seeds or maize, scattered at the base of your chosen tree will help to create a feeding area that grey squirrels associate with food. This can be repeated on a weekly basis, to build the grey squirrels confidence and visit the area regularly. 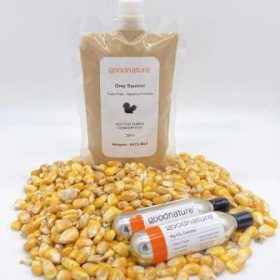 environments; its long life and hazelnut base remain attractive to grey squirrels for extended periods. Like all trapping though, we see seasonal changes in diet and feeding routine. Should you wish to try a different food in the trap, such as peanut butter, crushed walnuts or hazelnut butter, this can easily be done using the provided lure basket. Engaging with the trap and field craft is a vital part of any trapping regime, should your quarry be feeding on an established food source in the area; it can sometimes prove easier to use this to trap them, than trying to introduce a competing food source.

As with any trap, it is vital we do all we can to limit non-target interaction with it. Our A18GS humane squirrel trap has an entrance tunnel of only 5.4cm, the smallest entrance of any squirrel trap currently available in the UK. We have hundreds of hours of footage that monitored the interaction of the grey squirrel, during this time, no birds or non-targets interacted with the trap. Tree Creepers, Nut Hatches, Tits and Woodpeckers were seen in the back drop, but not near the trap. Be mindful of non-target species such as Dormice, Pine Martens and Red Squirrels; with these species present, we do not condone the use of our A18Gs or any other lethal trap. If they are present, live traps such as a squirrel cage trap will enable any non-target species which is caught, to be released without harm.

A18 Squirrel Trap – How to Use & Best Practice

Grey Squirrels have a varied diet; they will use the tree canopy to travel to feeding areas as this is far safer than traveling across the ground. With this in mind, field-craft is the key to any trapping campaign. If a trap is mechanically sound, it is up to the operator to ensure success. Below, we have summarised a walk-through on how to get the most from your Goodnature A18 grey squirrel trap.

Where should I put my Goodnature Squirrel Trap?

Squirrel trap placement will depend on your setting: an urban garden, young compartment, or established woodland. Squirrels will use trees to move through areas, then climb down them to forage and feed.

A good starting point is a mature tree with an interconnected canopy that allows them to access it from other trees, fences, or structures. Often, a squirrel will feel trapped if chased up a tree, which has no means of escape. In addition, squirrels will generally avoid undergrowth for fear of predation, so the base of the chosen tree should be clear and the vegetation short.

When installing the squirrel trap in a garden setting, aim to put the A18 on a tree you have seen squirrels on and you know they use regularly. Should you not have a tree, they can be placed on a fence post or other suitable structure such as a garden shed. It is essential that if placed on a fence, it is positioned so that they have to climb down at least 12 inches to access it. If the trap is set so the top of the A18 is in line with the top of the fence, it may well get chewed, as they can sit on the fence comfortably and engage with the trap from above. Consider fixing a piece of wood that sticks up above the top of the fence where squirrels often run; this means they will run underneath the trap entrance and are more likely to engage with the trap from the correct angle.

One of the main reasons we manage squirrel populations is for the protection of native broad-leaf woodland. Young trees such as Hornbeam, Oak, Beech, etc., are especially vulnerable to bark stripping and crown damage during their first 25 years of growth. Therefore, squirrel populations need to be managed to mitigate damage where possible. For example, if we consider a young compartment block as a loft in a house. The loft does not have a rat problem, but we fear one may be likely. While we do not want an infestation in the attic, we should not put baited traps there; otherwise, we actively pull rodents into this space. The same applies to a young woodland compartment.

Squirrels will not be living in the young trees; they will only venture in to feed; in these conditions, it is far better to trap them on the outskirts before entering the young woodland. Choose mature trees that are close to the vulnerable compartment. Often trees on rides are productive; they have a clear under storey, squirrels can bury food items and forage. 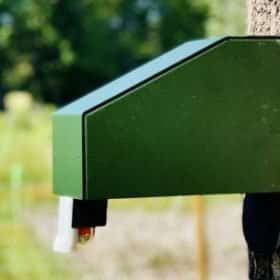 Pre-bait the area with whole maize; it is equally as effective as peanuts, more economical, and doesn’t tend to attract badgers quite so much.

Throughout the trapping campaign, I suggest a handful of maize scattered around the base of the trees that have traps attached; every trap visit. Grey Squirrels are creatures of habit; if we create an area with a known food source, such as hoppers, garden bird feeders, and game bird feed, they will visit, often daily.

A pivotal point to consider regarding young compartments is full canopy closure. As the trees start to grow and fill out, especially after a thin to waste or first thinning, they are at their most vulnerable. At this point, squirrels feel safe to travel through the canopy and start to strip bark to feed on the sap in June/July, when it is most dense in the crown. You will often see small trial patches where squirrels have removed roughly 3×3 inch bark sections to gauge how much sap is present. During this time, evidence suggests that they are looking for the sheer quantity of sap, not quality and sugar content.

When trapping in established, mixed broadleaf woodland, I suggest starting in problem areas and trapping at a density of 2-3 traps per site. This method helps to mitigate incorrect placement and ensure you can engage with the traps easily and more efficiently. Moving forward, one trap per hectare is the standard approach, muck like live cage trapping.

Should the campaign be escalated to landscape scale, it’s conceivable that a low impact management plan can be delivered at a density of 1 trap per 3-5 hectares. As with all grey squirrel management, I believe we have a wealth of experience, old and new, that we should draw on to best manage the threat that grey squirrels pose. With this in mind, all legal traps, shooting and more holistic approaches should also be considered, as part of an integrated management plan.